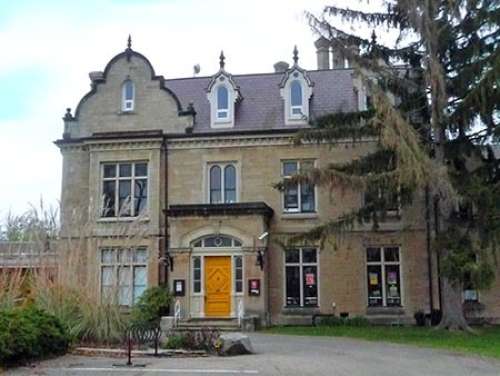 In 1951 a small group of painters formed the Studio Club and began to meet regularly in the basement of radio station CKTB under the guidance of artist David Partridge.

During the next few years studio space was found at Ridley College and later in the Coach House at 189 King Street.

Through the efforts of members and the local library board, a more permanent home was established at the Carnegie Library in 1953.
After renovations to the upstairs, an art gallery was opened, the first in St. Catharines.

The club was incorporated in 1956 under the name of the St. Catharines Art Association. Membership rapidly grew to more than 100 with art instruction classes being offered to both adults and children. Regular exhibitions were held, together with many other events including a masked ball, lectures, an art rental program and scholarships for promising artists.

Artwork was purchased which, in time, became the foundation of Rodman Hall’s permanent collection.

Interestingly, the actual purchase of Rodman Hall was executed through the St. Catharines Art Association.

The St. Catharines Arts Council was later absorbed into what eventually became today’s Rodman Hall Arts Centre, now the property of Brock University. In the fall of 2003, in an effort to secure our future and upgrade our accommodations, art association members voted unanimously to “return to our roots.”