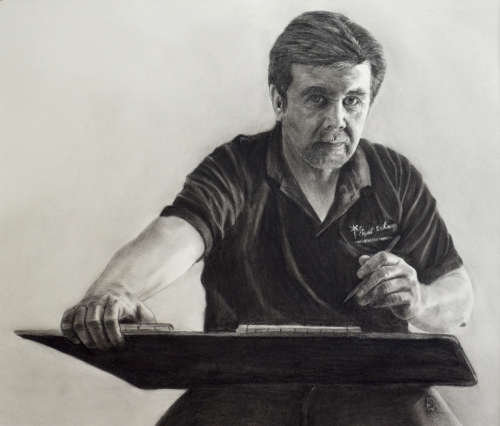 As an Artist, Teacher, Juror and Gallery owner of “Steve Wilson Studios and The Gallery” located 4681 Queen St. Niagara Falls, Ontario in the downtown arts and cultural area, an elected member of the Ontario Society of Artists and currently on the board serving as Director at Large, an elected member and previously Director of Exhibitions for the Society of Canadian Artists and an elected member of the Colour and Form Society. I was on the board of Directors at Beaux-Arts Brampton from 2003-2007 serving as President the last 2 years, and previously Vice-President of the Mississauga Arts Society. I co-juried the 2nd Annual Wildlife Nature and Native Show at Beaux-Arts 2010 with international artists Charles Pachter and Daphne Odjig as well as juried the CFS 2’x2’ exhibition, the Orangeville art group members show and the Franklin Carmichael Art Centre annual show to name a few.

I have shown across Canada, the United States, England, Tasmania and Turkey, in shows like the Toronto Art Expo, Red Dot Miami, Paralux and Spectrum New York VIBE Canada in London England, TAS ART Tasmania to name a few. I am in many private and corporate collections throughout the world, my work has also been featured at Queens Park, in The Peel Gallery, Brampton City Hall, Mississauga Gallery and Burnie Regional Art Gallery, Burnie. Tasmania, London England and Istanbul Turkey, I have been featured in many magazine and articles in print featured in a 3 page article in “SIDEROADS of Caledon and King” spring issue 2016 and a 7 page feature article in the inaugural issue of “FutuReale” in 2008 and his work graced the cover, I was also invited to attend to the 8th Portakal Cicegi International Plastic Arts Colony which took place at Sapanca Dogapark Turkey, 11-19 June 2016 for a 2 week venues with 29 international artist to paint for Ahmet Şahin and his museum collection. I am represented by The Gallery, Niagara Falls Ontario and Morrison Galleries Geneva Il.

In my work I try and convey a feeling, emotion or message by capturing in one frame or image that tells a story as well as challenging the viewers perception, that makes them laugh, cry, or starts a conversation and in some cases I present a satiric look at the world we live in. I try to include those little extras that allow the eye to explore and discover hidden gems or messages. My love for architecture and our urban and suburban landscape draws me in and challenges the way I portray our world.